Some unique phenomena that we call gemstone effects come out of the crystal structure of the stones. 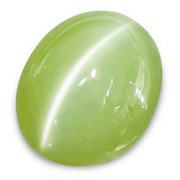 Usually a thin strip that spills from side to side as the stone moves. This is best seen on a polished cabochon under direct light. The polished stone is a longitudinal strip. This phenomenon is made up of needles of rutile, asbestos, pyroxene and other inclusions. The effect of the cat eye can be seen on many stones. E.g. chrysoberyl, rose quartz, moonstone, aquamarine, tourmaline, apatite, garnet, and many others. The name "Cat's Eye" is used correctly for chrysoberyl, for other stones it is correctly written for example "rose quartz with cat's eye, rose quartz cat eye" etc. Stones with cat's eye help the wearer to joy, wealth and happiness. It promotes intuition and increases spiritual awareness. It provides protection from negative energies, especially those coming from envious people. It can also improve vision. 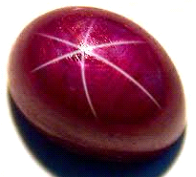 There are actually more cat-eyes folded into a star. The star can have 4 - 6 - 12 points from one point. The cross does not have to be at right angles. The phenomenon is again due to inclusions (ingrowth) of needles or platelets, similar to cat eye. This is best seen on a polished cabochon under direct spotlight, preferably sunlight. This phenomenon occurs on many stones. E.g. ruby, sapphire (variously colored), rose quartz, garnet, spinel, diopside, etc. Asterism (star) is a very special and beautiful phenomenon that adds stone to attractiveness and price. People believed that stone protects against evil forces and brings happiness. Sir Richard Frances, a well-known traveler and researcher of the 19th century, possessed an extremely large asteric sapphire. He believed that the stone helped him in his wandering and brought good relationships and services. He only showed the stone to the natives if he was warmly welcomed. The natives were happy to see such a rarity. It was believed in the west that it was a stone of fate andlucky, they believed that the thin lines of the star represent faith, hope, and nobility. For example, in Ceylon, some types of orange-pink sapphires (padparadscha) are still valued for their effects by refusing to sell them because they are intended only for certain caste of people in India. Wearing asteric stone provides safety, promotes grace, inner beauty and harmony. 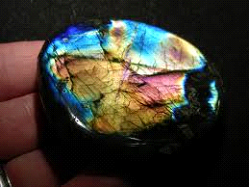 The rainbow color of the stone, when there is usually one bright color that changes when we move the stone. Very clear phenomenon in labradorites and rainbow adolescents and bytownites. The phenomenon is caused by layers of thin inclusions of crystals. Which decompose light into spectral colors.

Colorful reflections of pearls, nacre. This is caused by thin layers of crystals that break down light into spectral colors.

The iridescent colors we see inside or on the surface of the stones, this phenomenon looks like the surface of a soap bubble or oil spill. The phenomenon is caused by thin cracks that contain fluid. E.g. crystal, fiery agate. 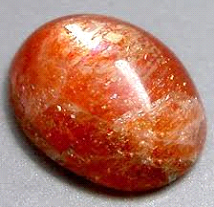 The color of the stone varies depending on the type of light in which we observe it. The difference in color is noticeable when the sun and artificial light (or fluorescent) light strikes. Well known for this property is alexandrite (chrysoberyl). Frequent staining is with sapphires, spinels and some grenades. The colors change from purple to green, from blue to purple, from clear to purple, fromorange on red, etc. 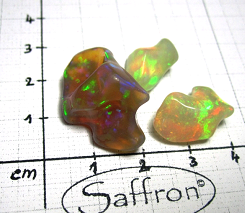 Flashes of rainbow colors can be found at the opals. The phenomenon is caused by the opal structure, which is composed of spheres decomposing white light into spectral colors. Minerals with this property usually contain a large percentage of water. E.g. opal, fiery agate, amolite. Often this effect disappears when water is lost. Therefore, you will usually see selling expensive opals wet or in the water. Such opals can no longer be removed from the water and dried because they become white and the effect is not visible through the haze. You must always buy opals for use in jewelry, preferably at the end of the stock exchange. 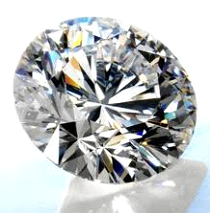 Dispersion is a natural property of each mineral to some extent decompose white light into spectral rainbow colors. This means that the polished stone is beautifully iridescent, though it is single-colored. The most known is this effect on diamonds and its synthetic imitations, such as cubic zirconia or YAG. The rainbow effect is also well visible on the cut crystal glass. Lead glass also has a strong dispersion. The rutile mineral has the strongest known dispersion, but in nature it does not appear to be pure in order to excel this effect.

Changes and modifications of stones

Color fading in sunlight, color change by artificial irradiation and other stone treatments.

Some of the minerals are light-sensitive, ie when they stay in the sun for a longer period of time (2 days to a year) they change color, mostly fade. Often these are minerals that have acquired their color by natural radioactive radiation (from rocks). This is a purple amethyst that; fades to crystal and some green hidenites, which often fade to light blue, filament, pink to clear in a few hours, some yellow and orange kunzites also lose yellow. The color can be returned to such stones by re-irradiation in the reactor, but who would then want to wear it

. (Kunzites from our shop are already exposed to the sun, so their color is already permanent).

Today it is carried out with the natural stones of a complete alchemical conjecture. In Ukraine, for example, in the big gemstones in Germany, they shine pure topazes from Nigeria and they then dare beautifully rich blue topazes for jewelry. (yes, those kerosene pieces you see everywhere are mostly irradiated). We offer both natural and irradiated. The Thais and Ginseng are again known for their experience of sapphire and ruby burning at different temperatures and reducing atmospheres, making pale stones unique. In Tanzania, the imperfectly colored Tanzanites are burning to "color". Heat treatment is not harmful to humans and most stones can handle it in health.
Rubies and Emeralds are again filled with a special stone-colored melted glass so that flawed cracks cannot be seen. After all, wearing it really looks better.
There is no point in writing down the stones, when microscopic layers of metals are steamed on the crystal surfaces or cuts because it is fashionable, something else at any moment. The favorites are Aqua Aurum, mystic topas, etc. when the surface of the stones flashes iridescently. The disadvantage is that this micro layer easily rubs off and often is not an advertised gold layer. In short, there are innumerable stone adjustments, various composites, artificial stones, and so on, but that would be a whole book.